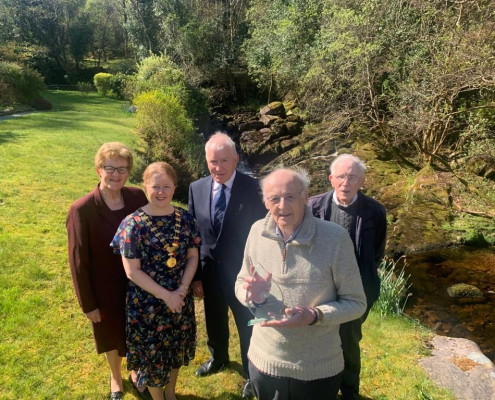 Fr Pat Ahern has been announced as the most recent recipient of the prestigious Kerry Association in Dublin Arts Award. The award sponsored by Kerry County Council is in recognition of his outstanding contribution to the promotion and development of artistic, cultural and literary tradition of his native county both nationally and internationally.

A native of Moyvane, Fr Pat was immersed in traditional Irish music from a young age. Having studied for the priesthood, he became a curate at St John’s in Tralee in 1957. He founded the St John’s Gregorian Choir and was given responsibility for liturgical music in the diocese. While in Tralee he produced and directed a number of liturgical pageants and was involved in the Scoraíocht movement in Comhaltas that led, in part, to the establishment of Siamsóirí na Ríochta in 1968. The Siamsóirí pioneered a form of folk theatre that presented Irish folk customs on stage through music, song and dance.

The Bishop of Kerry decided to send the young priest to UCC to study a B.Mus degree under Professor Fleischmann, who was a great inspiration to Fr Pat. Graduating with a music degree from UCC in 1962, Fr Pat joined the Catholic Communications Centre in Dublin and studied TV and radio production. He produced a weekly series called “Network” for RTE Radio.

Recalled to Kerry in 1973, he was released from parish work to devote himself to his work on folk theatre. His musical and theatrical work in the early years was channelled into the establishment of Siamsa Tíre, the national folk theatre of Ireland.

Siamsa initially operated from the old Theatre Royal Cinema in Tralee. In 1974 Teach Siamsa was opened in Finuge and focused on the north Kerry dancing tradition and in 1975 a second centre was opened at Carraig, i gceartlár na Gaeltachta, leath-bhealach idir Muiríoch agus Feochanach, taobh le séipéal na Carraige, in the West Kerry Gaeltacht with a focus on the Irish language.

Since then Siamsa Tire has gone from strength to strength, culminating in the opening of its new building on the edge of Tralee Town Park in 1991. Fr Pat was artistic director there until 1997.

In the late 1960’s and early 1970’s Fr Ahern was also involved in Comhaltas Ceoltóirí Eireann in Kerry and at a national level. He served as Chairperson of the Kerry County Board and produced the first three Fleadh Nua and also CCE’s inaugural concert tours to North America in 1972.

Other remarkable achievements included the first American tour where Siamsa sold out in Broadway in 1976, the many other tours that followed, the performance for the then Pope John Paul II at Limerick in 1979, for the Queen of the Netherlands, for the King and Queen of Sweden and in response to a personal invitation from Bob Hawke, the performance at the Australian Bicentennial celebrations in 1987.
The international aspect of Siamsa’s work was encapsulated by their collaboration with Bill Whelan and Maria Pages for the Seville Suite, performed by Siamsa in Spain and Dublin in 1992, and acknowledged as an inspiration for what became Riverdance.

Outside of Siamsa, Fr Pat has been responsible for numerous other productions including works on the life of Edmund Rice and the story of Christianity in Kerry. For the Millennium, he produced “Dance of Life” which featured over 800 singers and a cast of 200.
He is an accomplished fiddle player and is a former pupil of renowned dancing master, Jerry Molyneux.

Fr Pat’s contribution to the promotion of Irish culture has been previously recognised by a variety of organisations. He was honoured by Kerry County Council in 2018 for his outstanding contributions to the artistic, cultural and literary tradition of the county. In 2019 he was chosen by Comhaltas Ceoltóirí Eireann to be the Ard Ollamh at Fleadh Cheoil na hEireann for his outstanding contribution to the promotion and development of traditional music. He was also awarded an honorary fellowship from IT Tralee and an honorary doctorate from University College Cork. He was selected as the Kerryperson of the Year in 1992 by the Kerry Association in Dublin.

In announcing the award Keelin Kissane, Chairperson of the Kerry Association in Dublin said “Fr Pat has had an inspirational impact both in Kerry and internationally. He has transferred the magic and music and mystery of Kerry to the stage and projected it magnificently to ever appreciating audiences both at home and throughout the world. He has been a great Ambassador for Kerry. Ciarraíoch go smior is ea Father Pat. Tá sé bródúil as a shinsear agus as a chondae agus as gach a bhaineann le dúchas na Ríochta. He has given much to Kerry. This award is a fitting testimony to his creative endeavours on behalf of his county and country throughout his lifetime”.

Jimmy Deenihan, Chairperson of the Selection Committee said Fr Pat Ahern is a worthy recipient of this prestigious award. “But for his vision in establishing Siamsoiri Na Riochta back in the 1960’s the tradition of the music, song and dance unique to North Kerry may have disappeared. Fr Pat has translated this rich cultural tradition and has transmitted it on stage and film to a global audience. For him it is people that give rise to culture and culture cannot exist without people”.

About the Kerry Association in Dublin Arts Award:
The Kerry Association in Dublin was established in 1951 to help encourage and develop the great sporting, literary and cultural heritage of Kerry. The Association’s Arts Award, which is sponsored by Kerry County Council, recognises a Kerry individual’s excellence in the Arts. Previous recipients are:
The late Professor Brendan Kennelly- 2017
Rev J Anthony Gaughan – 2018
Pauline Bewick – 2019