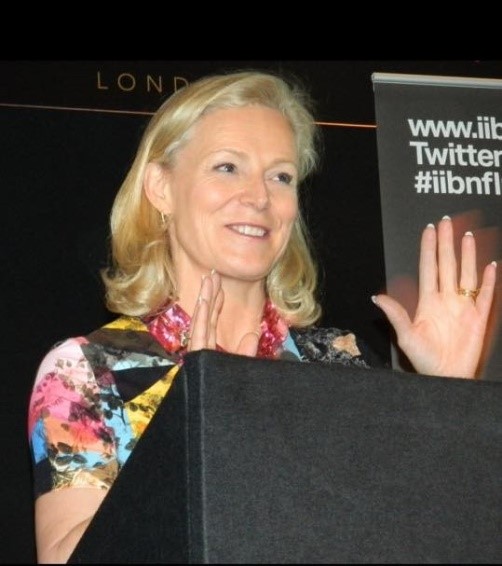 Kerry Association London Awards’ night on Friday 20th October, 2017 Report by Sean Moriarty – Vice Chair
When Liz Shanahan arrived in London 31 years ago, her first social occasion was the Kerry Association Dinner and Dance.
Little did she know that just three decades later she would be the recipient of the prestigious annual Kerry Person of Year Award, presented each year by the Kerry Diaspora in London to the person who has contributed most to Kerry life at home and abroad over the preceding 12 months.
The Castleisland native did just that on Friday night last, as she took home the Denis Reidy memorial trophy – only the second woman ever to do so. She joins an illustrious list of Kerry men and women, like Christy Kissane, Dan Tim Sullivan, Shelagh O’Connor and Patsy Byrne to name just a few.
She was recognised by her home people for her work in medical science and business achievements, a long way from her first job as a fax sales person 31 years ago.
In front of an audience of around 300 people, (guests included the Mayor of Kerry John Sheahan and Kerry County Board chairman Tim Murphy), she accepted the prestigious award at the famous Clayton Crown Hotel in the heart of the very Irish suburb of Cricklewood.
She said: “I hope my story inspires other women. Kerry is a County that punches above its weight. This really is an extraordinary accolade and I can’t believe I have come the full circle.
The great Colm “The Gooch” Cooper was the recipient of the second annual Christy Kissane Memorial Trophy in recognition of his new-found career as a media pundit since his retirement from inter-county football earlier this year.
Although he was unable to make the gala presentation as he was preparing for Dr Croke’s successful defence of the county football championship on Sunday, he said: “2017 is a landmark year for me, retiring form inter-county football and winning the All Ireland club championship medal. I enjoyed every minute of my playing days for the mighty Kingdom, and for me Christy Kissane was always and all ways will be what is great about the Kingdom. I am proud to know the Kissane family for many years.
Proud Dr Crokes member and Kerry Association London Secretary, Tara Cronin, collected the award on his behalf.
The Association’s Chairman, the legendary Dan Tim Sullivan was absent from Friday night’s celebration as he continues to make a good recovery from a serious illness that befell him at the start of the summer. His daughter Julie gave a short speech thanking the people of London and Kerry for their support during this challenging time.
In his absence, Association Vice Chair, Sean Moriarty said: “It has been another successful year for the Kerry Association London and apart from tonight’s gala we have had a successful golf day in May and a fourth successive and successful Darkness into Light London charity walk – an event organised and promoted entirely by members of this Association – and countless social occasions through the year.”
“Our prime focus is to raise funds and distribute them to individuals or organisations that need support, and tonight’s event is one our biggest sources of income, these funds, your hard-earned cash, goes to many needy causes both here in London and at home in County Kerry and we thank each one of you for your continued generosity and support – we could not do what we do without all of you.”