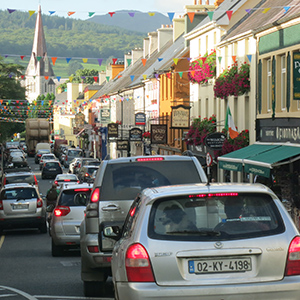 Book Launch of Mind the View, a collection of poems, paintings and mosaics by Tarbert man and poet, Paddy Creedon, and Listowel based artist and Duagh native, Olive Stack. The Dublin launch of this book took place in the Pepper Canister Church on Mount Street on Friday 27 February ,2015.

Opening Night of The Field, The Gaiety Theatre, 28 April 2015

This year’s annual fund-raising event, with which members of the Association are involved, in aid of Our Lady’s Hospice, Harold’s Cross, took place in the Garda Boat Club, Longmeadows, Islandbridge on Thursday 9th July. Wine, cheese and finger food was served; plenty of entertainment was provided and there was a raffle and an auction. The event – now in its seventeenth year – is a very sociable and enjoyable one, as those of you who have attended in the past can vouch.

Killarney born artist, Dolores Lyne, daughter of the late Kerry footballer, Jackie Lyne, will be opening a solo show at the Ranelagh Arts Centre which will run from 15th September to 3rd October as part of the 10th annual Ranelagh Arts Festival. Called, Placing the Word, it is an exploration of the Kerry landscape and writers’ responses to it. It features paintings of Kerry places that inspired writers such as Nell McCafferty, Nuala Ní Dhómhnaill, John McAuliffe, Bernard O’Donoghue, Mick Delap, Eileen Sheehan, Theo Dorgan, Paddy Bushe, Ellen Cranitch and Alfred Lord Tennyson. The exhibition will be officially opened by Minister Jimmy Deenihan on Tuesday 15th September at 6pm and the Killarney Brewing Company will be providing refreshments.

A reading with some of these writers will take place on Wednesday 16th September at 8pm in Sandford Park School – admission €5.

Dolores will be giving a talk in the Arts Centre at 2pm on Saturday 19th September where she will explain the inspirations behind her work. She would love some Kerry support.

The traditional Kerry Team Post All Ireland Function will take place in The Ballsbridge Hotel, Dublin 4 (the Old Jury’s Hotel).

Tuesday 24th November at 7pm – Iveagh House, 80 St. Stephen’s Green – Launch of Kerry Heroes of 1916 Calendar. A calendar which will feature the Kerry heroes of 1916 will be launched in the Department of Foreign Affairs and Trade offices in Iveagh House, 80 St Stephens Green, on Tuesday 24 November at 7p.m. Proceeds will go towards the Literary Centre in Listowel. RSVP to Bernadette Lee if you propose to attend at bernadette.lee@taoiseach.gov.ie. Tel 01/6194483.

On Saturday 28 November Kerry friends and players will gather in the Courtyard Hotel in Leixlip for a great Kerry night. The night will feature the launch of Tomás O’Sé’s recent book “The White Heat”. The book is an account of his upbringing and his time as one of the best defenders of football, where he won 5 All-Ireland Senior medals and had 88 championship appearances – the most by any player. The event will run from 7pm to 10pm.